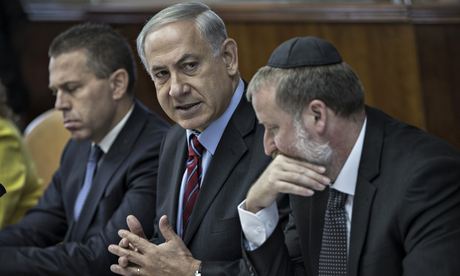 Binyamin Netanyahu will push ahead with a rare change to Israel‘s basic laws – which amount to the country’s constitution – to insist Israel is “the nation state of one people only – the Jewish people – and of no other people”.

At Sunday’s weekly cabinet meeting, Netanyahu said the civil rights of minorities, including Arabs, would be guaranteed, and the move was vital at a time when aspects of Israel’s legitimacy were “under a constant and increasing assault from abroad and at home”.

Netanyahu proposed the change last week during a visit to Tel Aviv’s Independence Hall, attracting fierce criticism from political rivals and support from some of his allies. The move follows a Palestinian refusal in peace talks to recognise the status that Netanyahu described.

The proposed law would be in addition to Israel’s declaration of independence of May 1948 – the anniversary of which is celebrated on Tuesday – which defines Israel as a Jewish state.

Most of Israel’s basic laws deal with procedural issues relating to elections, the appointment of the prime minister, state payments and the administration of the judiciary, but some laws have been more controversial, including the 1980 law that designated Jerusalem as the capital of Israel.

Despite the intention that the new law should guarantee full equal rights, critics say it strays into contentious territory in its explicit definition which, regardless of passport and citizenship, would codify a differential notion of nationhood.

He added: “Of course, there are those who do not want the state of Israel to be defined as the nation state of the Jewish people. They want a Palestinian nation state to be established alongside us and that Israel should gradually become a binational, Arab-Jewish state inside shrunken borders. But I simply say that one cannot hold the national stick at both of its national ends.

“They cannot say that they want to separate from the Palestinians in order to prevent a binational state, which has a certain logic, and also sanctify a binational, Jewish-Arab state within the permanent borders of the state of Israel.”

Among those who have expressed concern over the proposal is the justice minister, Tzipi Livni. Although in favour of defining Israel more clearly in law as “the national home of the Jewish people and a democratic state”, she has expressed opposition to “any law that gives superiority” to the Jewish nature of state over the country’s democratic values.

She said she could only support legislation where “Jewish and democratic would have the same weight, not more Jewish than democratic, nor more democratic than Jewish”.

“Unfortunately, the diplomatic destruction Netanyahu is causing will lead Israel to lose its Jewish majority and become a binational state. This unfortunate fact is something no law can hide.”