Fatah and Hamas delegations will meet for mediation before indirect negotiations with Israel commence. 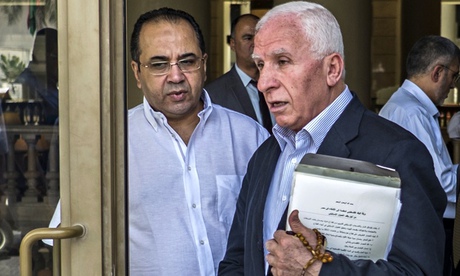 Egypt will host talks between rival Palestinian factions within days, followed by indirect negotiations between Palestinians and Israelis on the ceasefire in Gaza, the state news agency Mena said on Saturday.

The report quoted an Egyptian official as saying that delegations from the Palestinian president Mahmoud Abbas‘s Fatah faction and the Islamic militant group Hamas, which dominates Gaza, would meet on Monday “to complete the Palestinian reconciliation”.

The official said Palestinian negotiators would then meet with their Israeli counterparts starting on Wednesday to continue talks on a ceasefire in Gaza that resulted from Egyptian-mediated talks in Cairo last month.

Israel‘s delegation will travel to Cairo on Tuesday, an Israeli official said.

Azzam Ahmed, a Fatah official and head of the Palestinian delegation to last month’s talks, confirmed the plan for reconciliation talks to take place this week.

He said he expected negotiations with Israel to follow, in comments reported by the Palestinian WAFA news agency.

At last month’s talks, the two sides did not meet face-to-face but conducted their negotiations through Egyptian officials who shuttled back and forth.

The Palestinians want an end to the blockade of Gaza by Israel and Egypt, which view Hamas as a security threat and are seeking guarantees that weapons will not enter the small, densely populated territory of 1.8 million people.

The Palestinians are expected to press for construction of a sea port for Gaza and Israel’s release of Hamas prisoners in the occupied West Bank, possibly in a trade for the remains of two Israeli soldiers believed to be held by Hamas.

Fatah and Hamas, whose popularity soared in Gaza after the fighting, appeared to have healed a bitter seven-year-old rift in April when they announced plans to form a unity government with agreed policies.

But tensions have grown in recent weeks.

The ceasefire struck last month included stipulations that Abbas’s Palestinian Authority should take over civil administration in Gaza from Hamas.

Hamas thought that would mean its 40,000 employees in Gaza, who have not been paid for months, would be taken care of via the Palestinian Authority payroll.

But Fatah is loath to give any support to Hamas until it stops running what Abbas has described as a “shadow government” in Gaza and commits itself fully to the agreed unity government.

In addition, international donors including the European Union who support the Palestinian Authority’s budget first want a thorough audit of workers, and cutbacks to the bloated payroll.

Three weeks ago, Israel’s internal security service said it had foiled a Hamas plot to launch a coup in the West Bank, an allegation Hamas denied.

Fatah also accused Hamas of putting hundreds of its supporters in Gaza under house arrest during the war, and shooting at those who tried to flee Israeli bombings.